Book Grammar West To East: The Investigation Of Linguistic Meaning In European And Chinese Traditions By Edward McDonald PDF

This book Grammar West To East: The Investigation Of Linguistic Meaning In European And Chinese Traditions PDF compares the historical development of ideas about language in two major traditions of linguistic scholarship from either end of Eurasia – the Graeco-Roman and the Sinitic – as well as their interaction in the modern era.

It locates the emergence of language analysis in the development of writing systems, and examines the cultural and political functions fulfilled by traditional language scholarship. Moving into the modern period and focusing specifically on the study of “grammar” in the sense of morph syntax/ lexico grammar, it traces the transformation of “traditional” Latin grammar from the viewpoint of its adaptation to Chinese, and discusses the development of key concepts used to characterize and analyze grammatical patterns. 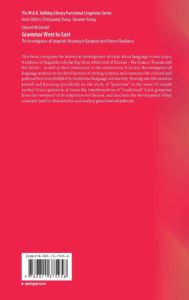