Book A grammar of Sanzhi Dargwa By Forker & Diana PDF

Series : Languages of the Caucasus 2

This book is the first comprehensive descriptive grammar of Sanzhi, written from a typological perspective. It treats all major levels of grammar (phonology, morphology, syntax) and also information structure. Sanzhi Dargwa is structurally similar to other East Caucasian languages, in particular Dargwa languages. It has a relatively large consonant inventory including pharyngeal and ejective consonants.

Sanzhi morphology is concatenative and mainly suffixing. The language exhibits a mixture of dependent-marking in the form of a rich case inventory and head-marking in the form of verbal agreement. Nouns are divided into three genders. Verbal inflection conflates tense/aspect/mood/evidentiality in a rich array of synthetic and analytic verb forms as well as participles, converbs, a masdar (verbal noun), and infinitive and some other forms used in analytic tenses and subordinate clauses.

Salient traits of the grammar are two independently operating agreement systems: gender/number agreement and person agreement. Within the nominal domain, modifiers agree with the head nominal in gender/number. Agreement within the clausal domain is mainly controlled by the argument in the absolutive case.

Person agreement operates only at the clausal level and according to the person hierarchy 1, 2 > 3. Sanzhi has ergative alignment in the form of gender/number agreement and ergative case marking. The most frequent word order at the clause level is SOV, though all other logically possible word orders are also attested. In subordinate clauses, word order is almost exclusively head-final. 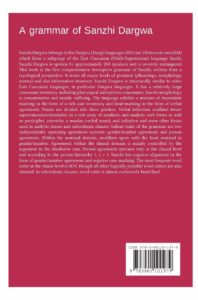