NASA’s New X-ray Mission Will Reveal the Secrets of Extreme...

NASA is getting ready to launch a new set of X-ray eyes into space. The Imaging X-ray Polarimetry Explorer, or IXPE, is the first space observatory of its kind, designed to study some of the universe’s most energetic objects – the remnants of exploded stars, powerful particle jets spewing from feeding black holes, and much more.

IXPE will not be as large or powerful as NASA’s flagship X-ray telescope, the Chandra X-ray Observatory. But what IXPE lacks in imaging power, it makes up by seeing an aspect of cosmic X-ray sources that has gone largely unexplored until now – polarization.

“The launch of IXPE marks a bold and unique step forward for X-ray astronomy,” said Dr. Martin Weisskopf, IXPE’s principal investigator. “IXPE will tell us more about the precise nature of cosmic X-ray sources than we can learn by studying their brightness and color spectrum alone.”

X-rays are a type of high-energy light. They form in places where matter is subjected to extreme conditions, such as violent collisions, massive explosions, 10-million-degree temperatures, rapid rotations, and strong magnetic fields. They contain specific information about the powerful phenomena that cause them. However, because the Earth’s atmosphere prevents cosmic X-rays from reaching the ground, they can only be collected by space telescopes.

Polarized light contains unique information about where it comes from and what it passes through. Light is composed of interconnected waves of electric and magnetic fields that interact with one another in such a way that they oscillate, or vibrate, at right angles to the path of the light. The vibrations can be vertical, horizontal, or anywhere in between. Polarized light is made up of electric fields that vibrate only in one direction.

Light from a typical bulb, for example, generates electric fields that vibrate in all directions. When light is scattered or reflected by particles or surfaces, it can become polarized, with vibrations aligned only in one direction.

Scientists can learn more about the structure and behavior of celestial objects, their surrounding environments, and the physics of how X-rays form by analyzing polarized X-rays with IXPE.

IXPE’s polarization measurements will also provide answers to questions that astronomers have been pondering for decades, such as:

“IXPE will help us test and refine our theories of how the universe works,” Weisskopf said. “There may be even more exciting answers ahead than the ones we’ve hypothesized. Better yet, we may find whole lists of new questions to ask!” 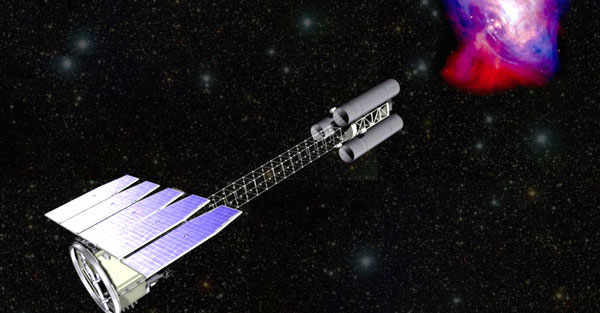 Adding polarization to the X-ray mix has long been a goal for Weisskopf, who is also the Chandra project scientist. It is difficult to take such measurements. It requires sensitive instruments, a rocket ride into space, and long periods of observation.

The powerful new X-ray vision of IXPE is made possible by state-of-the-art polarization detectors developed in Italy. Three identical telescopes are carried by IXPE. Each has a set of nested, cylinder-shaped mirrors that collect X-rays and feed them to a detector, which captures incoming X-rays and measures both the amount and direction of polarization.

“This is going to be groundbreaking in terms of X-ray data acquisition,” Weisskopf said. “We’ll be analyzing the results for decades to come.”

IXPE is scheduled to launch on a Falcon 9 rocket from NASA’s Kennedy Space Center in Florida on December 9. NASA and the Italian Space Agency collaborate on IXPE. Ball Aerospace is the main industry partner.