WHAT IS QUANTUM ENTANGLEMENT TELEPORTATION? 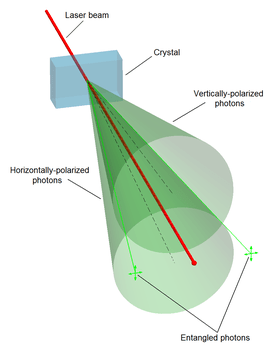 Contrary to the usual use of the word “teleport,” quantum teleportation does not involve the movement or translation of particles themselves. Instead, in quantum teleportation, information about one quantum state is transported great distances and replicated somewhere else, according to Nature News.

It’s best to think of quantum teleportation as the quantum version of traditional communication.

First, a sender prepares a particle to contain the information (i.e., the quantum state) they want to transmit. Then, they combine this quantum state with one of an entangled pair of particles. This causes a corresponding change in the other entangled pair, which can be sitting an arbitrary distance away.

The receiver then records the change in the entangled partner of the pair. Finally, the sender must transmit, via normal channels (i.e., limited by the speed of light), the original change made to the entangled pair. This allows the receiver to reconstruct the quantum state in the new location.

This may seem like a lot of work to pass along one measly piece of information, but quantum teleportation enables completely secure communication. If an eavesdropper intercepts the signal, they will break the entanglement, which would be revealed when the receiver compares the traditional signal to the changes made in the entangled pair.

WHAT CAN QUANTUM ENTANGLEMENT BE USED FOR?

Perhaps the most widely used application of quantum entanglement is in cryptography. According to Caltech Magazine, in this scenario, a sender and a receiver build a secure communication link that includes pairs of entangled particles. The sender and receiver use the entangled particles to generate private keys, known only to them, that they can use to encode their messages. If someone intercepts the signal and attempts to read the private keys, the entanglement breaks, because measuring an entangled particle changes its state. That means the sender and receiver will know that their communications have been compromised.

Another application of entanglement is quantum computing, in which large numbers of particles are entangled, thereby allowing them to work in concert to solve some large, complex problems. For example, a quantum computer with just 10 qubits (quantum bits) can represent the same amount of memory as 2^10 traditional bits.

Entropy is surely one of the most perplexing concepts in physics. It’s variously described as a measure of a system’s disorder – or as the amount of useful work that you can get from it – or as the information hidden by the system. Despite the seeming ambiguity in its definition, many physicists hold entropy to be behind one of the most fundamental laws of physics.