Astronomers detected the heaviest element yet in two exotic exoplanets.

Astronomers detected the heaviest element yet in two exotic exoplanets.

And it rains liquid iron and gems on these exoplanets.

In the atmospheres of two very hot exoplanets, where liquid iron and jewels fall from the sky, astronomers have found the heaviest element ever. Researchers have recently discovered barium in their upper atmosphere, which makes them considerably more odd than originally believed. As if that weren’t weird enough, 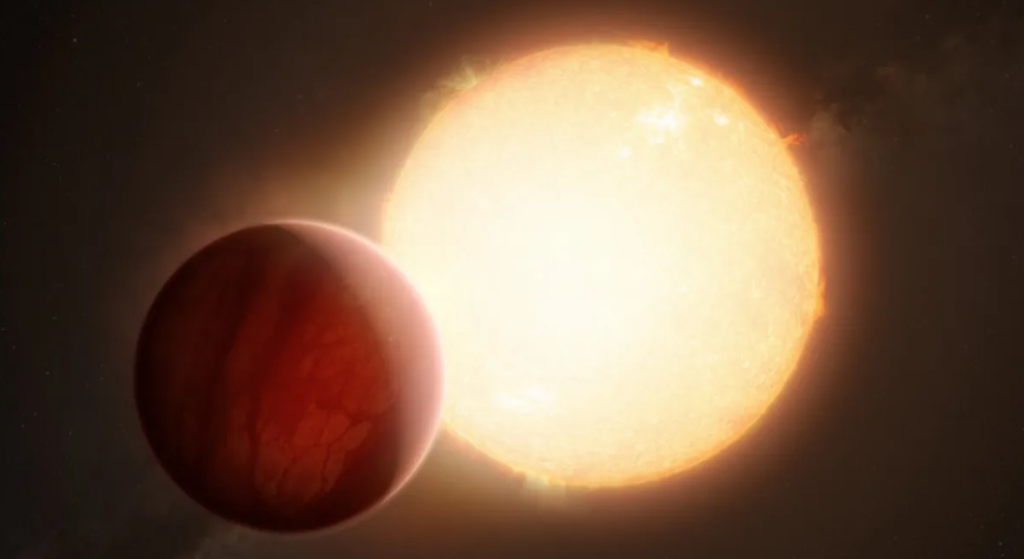 “This may be considered a “accidental” finding. Barium was not something we were specifically looking for or expecting, so we had to double-check that it was actually coming from the planet because it had never been observed in an exoplanet before “Portuguese doctoral student at the University of Porto and the Institute of Astrophysics and Space Sciences, Tomás Azevedo Silva, is the lead author of the study.

WASP-76 b and WASP-121 b are two exoplanets that orbit stars outside of our solar system. As they resemble Jupiter, the biggest planet in our solar system, in size, they are referred to as ultra-hot Jupiters. However, the surface temperatures of these exoplanets are extremely high, exceeding 1,832 degrees Fahrenheit (1,000 degrees Celsius). The near proximity of these exoplanets to their home stars, where each one orbits once every one to two days, is the cause of their extreme temperatures.

The exoplanets’ extreme heat is what gives them their peculiar features, such as the iron showers that are predicted to occur on WASP-76 b and the metal clouds and gem-flooding meteors on WASP-121 b.

The discovery of barium in these exoplanets’ upper atmospheres astonished astronomers. It weighs 2.5 times as much as iron.

Why is there such a heavy element in the higher layers of these planets’ atmospheres is a perplexing and paradoxical question. according to Tomás Azevedo Silva

According to study coauthor Olivier Demangeon, a postdoctoral researcher at the University of Porto and the Institute of Astrophysics and Space Sciences in Portugal, “given the high gravity of the planets, we would expect heavy elements like barium to quickly fall into the lower layers of the atmosphere.”

The discovery raises the possibility that the atmosphere of these exoplanets may be much more exotic than previously believed, even if researchers are still unsure of the process.

Their atmospheres are enormously expansive and gaseous, which makes them simpler to see and analyze than those of smaller or colder planets, according to Demangeon.

The group made use of Espresso, an instrument on the Very Large Telescope (VLT) of the European Southern Observatory (ESO), which examines starlight that has passed through the atmosphere of an exoplanet. Based on the characteristics of the starlight, it is able to determine the type of atmosphere the starlight had to travel through before it reached the analyzer and to identify the elements that reside there, including barium.

These latest findings demonstrate that scientists have barely begun to unravel the secrets of exoplanets. Future telescopes like the Extremely Large Telescope (ELT) of the European Southern Observatory (ESO) will be equipped with instruments like the high-resolution ArmazoNes high Dispersion Echelle Spectrograph (ANDES), which will allow astronomers to study the atmospheres of exoplanets large and small, including those of rocky planets similar to Earth, in much more detail and to glean more information about the nature of these strange worlds.