What are US articles of impeachment, and what happens next?

US Democrats on Tuesday introduced two articles of impeachment against Donald Trump, charging the president with abuse of power and obstruction of justice.

Democrats say the formal charges are related to Trump’s effort his effort to pressure Ukraine to investigate a political rival.

The announcement came after weeks of public hearings in the House Intelligence Committee, a 300-page report and divisive rhetoric highlighting the political divide that has come to define the impeachment process.

With Democrats moving forward with impeachment charges, here’s a quick guide to how impeachment works and what happens next.

The founders of the United States included impeachment in the US Constitution as an option for removal of presidents by Congress.

They agreed that presidents could be removed if found guilty by Congress of “treason, bribery or other high crimes and misdemeanors”.

2. What are articles of impeachment?

In the context of Trump, Democrats first pursued a two-month inquiry, led by the House Intelligence Committee, which submitted a 300-page report about its findings earlier this month.

Democrats have accused Trump of abusing his power of office and obstruction of Congress. 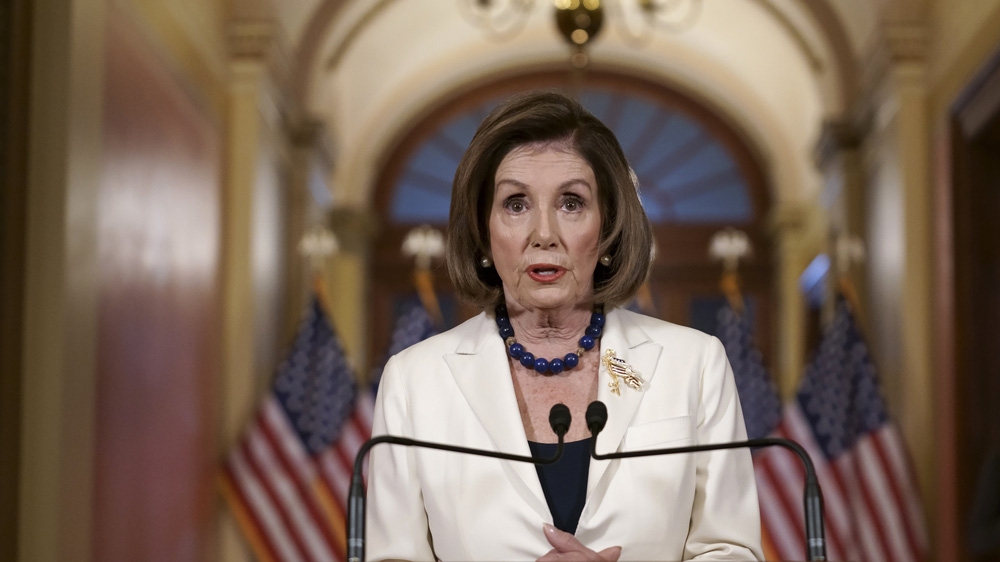 Speaker of the House Nancy Pelosi makes a statement at the Capitol in Washington [File: J. Scott Applewhite/AP Photo]

The inquiry is centred on a July phone call in which Trump asked Ukrainian President Volodymyr Zelenskyy to launch an investigation into former Vice President Joe Biden, a 2020 presidential frontrunner, and his son Hunter, who served on a board of a Ukrainian gas company. Trump also wanted an investigation into a debunked conspiracy theory that Ukraine, not Russia, interfered in the 2016 elections.

At the time of the call, the Trump administration was withholding nearly $400m in military aid from Ukraine.

Trump has denied any wrongdoing, calling the impeachment inquiry a hoax. The president and his White House have refused to participate in the inquiry, instructing members of his administration to do the same.

Trump, a Republican, “sees himself as above the law,” said Judiciary Committee Chairman Jerrold Nadler. “We must be clear, no one, not even the president, is above the law.”

The House Judiciary Committee is expected to vote on whether to send the articles of impeachment to the full House by Thursday.

Many expect the full House to vote on the formal impeachment charges by Christmas, December 25. Impeachment in the 435-member House must be approved with a simple majority.

If the House votes to impeach, the matter moves to the Senate, where a trial is held. The chief justice of the Supreme Court presides over the trial.

A two-thirds majority vote is required in the 100-member Senate to convict and remove a president from office.

The Senate is made up of 53 Republicans, 45 Democrats and two independents who caucus with the Democrats. At this point, no Republicans have indicated they will vote against the president should a trial take place.

4. Who would become president if Trump was removed?