Scientists Confirm The Discovery Of A Mysterious Wall At Edge...

The Voyager 2 NASA spacecraft joined Voyager 1 on November 5, 2018, outside the heliosphere, which is described as “the protective bubble of particles and magnetic fields formed by our Sun.”
Five new scientific articles detailing what has occurred after the spacecraft crossed the line and battled the dimming of the light have been published in the journal Nature Astronomy, which is hailed as a “watershed moment in our study of space.”

The discoveries from Voyager 2 will “provide a picture of this cosmic coastline, where the environment formed by our Sun stops and the vast ocean of interstellar space starts,” according to NASA’s Jet Propulsion Laboratory.

This is a watershed moment in our exploration of space: we have for the first time left the confines of ‘home’ and are taking our very first tentative steps into the interstellar space – the Milky Way galaxy of which we are a part. That’s an amazing distance to come in only 62 years, since the launch of the first satellite. Who knows what the next 62 will bring?

Each research paper centers on the findings of the spacecraft’s five operational instruments, which include a magnetic field sensor, two detectors for energetic particles with various energies, and two instruments for studying plasma.

However, what exactly is the heliosphere? In his explanation, Hayes called it a “rather permeable barrier.”

Inside is the space we live in, which is the very extended influence of the Sun and the solar wind that it generates, and outside is a region that is not under that same influence. Both Voyagers found this to be the case. The original model was that the solar wind would just gradually fade away until one was in the interstellar medium; clearly that’s not the case. 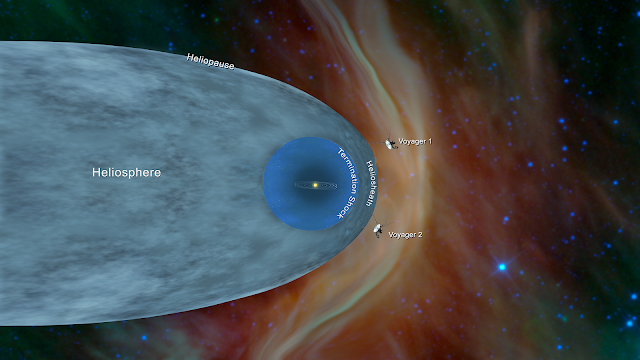 While the Voyager 2 has yet to enter undisturbed interstellar space, the probes offer a groundbreaking illustration of how the ‘Sun interacts with the stuff that fills most of the space between stars in the Milky Way galaxy’.

In terms of space exploration, it means that we have only barely scratched the surface of what it means to be in interstellar space. All told, we have entered a new era of exploration that is posing as many new questions as it has answered our older ones.

Maybe it won’t be long until we send Matthew McConaughey through a wormhole.