Ramjet engines, How do they work?

Ramjet engines, How do they work? 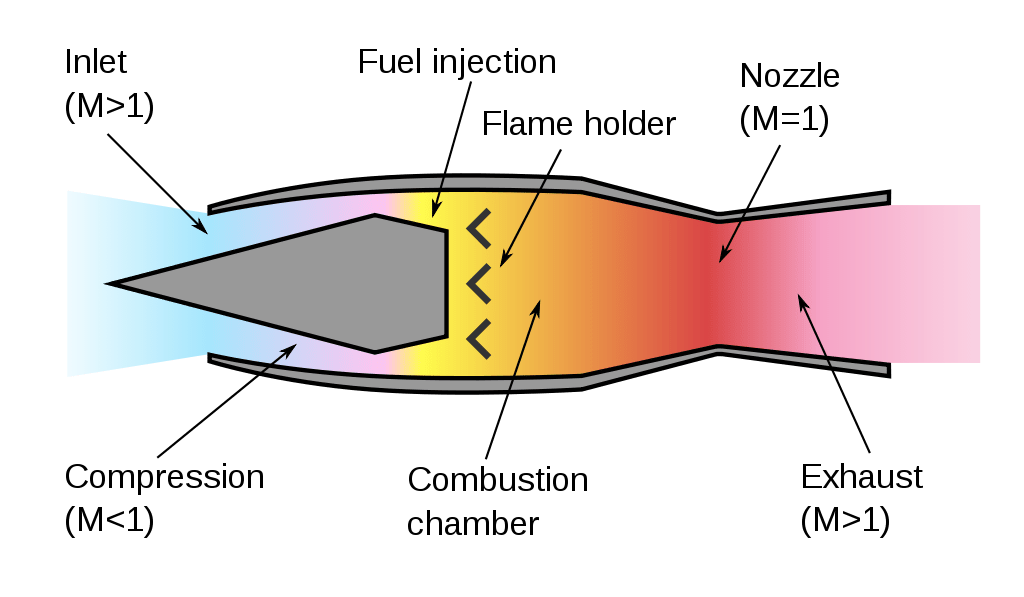 A ramjet, sometimes referred to as a flying stovepipe or an athodyd (aero thermodynamic duct), is a form of airbreathing jet engine that uses the engine’s forward motion to compress incoming air without an axial compressor or a centrifugal compressor. Because ramjets cannot produce thrust at zero airspeed, they cannot move an aircraft from a standstill. A ramjet-powered vehicle, therefore, requires an assisted take-off like a rocket assist to accelerate it to a speed where it begins to produce thrust. Ramjets work most efficiently at supersonic speeds around Mach 3 (2,300 mph; 3,700 km/h). This type of engine can operate up to speeds of Mach 6 (4,600 mph; 7,400 km/h).

Ramjets can be particularly useful in applications requiring a small and simple mechanism for high-speed use, such as missiles. The US, Canada, and UK had widespread ramjet powered missile defenses during the 1960s onward, such as the CIM-10 Bomarc and Bloodhound. Weapon designers are looking to use ramjet technology in artillery shells to give added range; a 120 mm mortar shell, if assisted by a ramjet, is thought to be able to attain a range of 35 km (22 mi) They have also been used successfully, though not efficiently, as tip jets on the ends of helicopter rotors.

Ramjets differ from pulsejets, which use an intermittent combustion; ramjets employ a continuous combustion process.

As speed increases, the efficiency of a ramjet starts to drop as the air temperature in the inlet increases due to compression. As the inlet temperature gets closer to the exhaust temperature, less energy can be extracted in the form of thrust. To produce a usable amount of thrust at yet higher speeds, the ramjet must be modified so that the incoming air is not compressed (and therefore heated) nearly as much. This means that the air flowing through the combustion chamber is still moving very fast (relative to the engine), in fact it will be supersonic—hence the name supersonic-combustion ramjet, or scramjet.