A “twin” for the Earth was found by astronomers 470 light years away.

The finding of alien life on Earth’s twin is a possibility. In other words, we should discover an extrasolar planet with characteristics that are similar to Earth’s. Such a world has already been found by researchers, but does it have the ability to support life?

We bring to your attention Kepler-438 b! It is 470 light years away from us and is essentially an Earth twin. Near the star Kepler-438 in the constellation Lyra, there is a planet. It is a single red dwarf, 0.54 solar mass, and 0.52 solar radius.

With an index of similarity to Earth of 0.9 (maximum – 1), the planet Kepler-438 b ranks first among all known exoplanets despite being just 12% larger than Earth in size.

Additionally, because the exoplanet is located in the habitable region of the star, it receives enough heat and light to support liquid water on its surface. about 35 days in one orbit. Red dwarfs have temperatures and luminosities that are lower than those of the Sun, despite some claims to the contrary. 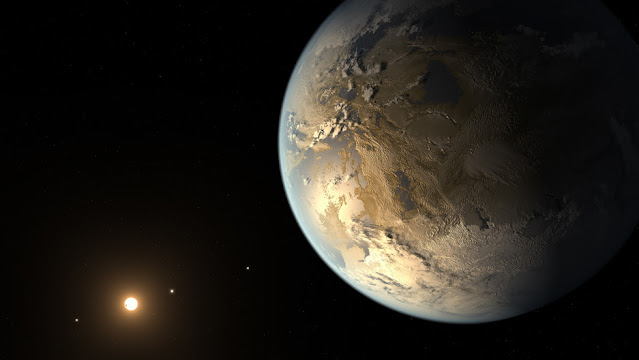 Comparison between Kepler-438 b with Earth For a very long time, scientists believed that this planet could sustain weather patterns similar to those on Earth, including water, rain, clouds, and air. Unfortunately, the truth was much more gloomy. In spite of the fact that Kepler-438 b is quite similar to Earth, you must also take the nearby star’s activity into account.

In 2015, researchers found that the red dwarf Kepler-438 behaves much like a flashing star. Additionally, these flashes are ten times as powerful than solar indices and only happen once every several hundred days (100 billion megatons of TNT). This suggests that the planet is subjected to intense radiation bombardment on a continual basis, which has caused the loss of the atmosphere and eliminated any chances for the emergence of life.

As a result, when looking for life, you must take into account both the characteristics of the planet and the behavior of the local star. Researchers believe the exoplanet Kepler-438 b will be able to maintain its atmosphere and primitive life forms in water provided it can maintain a strong magnetic field.

Although the temperature in this scenario reached 60 ° C, we know that life can survive at such extreme temperatures on Earth. While the habitability of the “second Earth” is still in question.

But some astronomers also say it is not habitable. Due to its stars being a very active star.

You read there research here.