What Is an Atom and How Do We Know?

What Is an Atom and How Do We Know?

Protons are positively charged particles found within atomic nuclei. Rutherford discovered them in experiments with cathode-ray tubes that were conducted between 1911 and 1919. Protons are about 99.86% as massive as neutrons.

Three quarks make up each proton — two “up” quarks (each with a two-thirds positive charge) and one “down” quark (with a one-third negative charge) — and they are held together by other subatomic particles called gluons, which are massless.

Electrons are tiny compared to protons and neutrons, over 1,800 times smaller than either a proton or a neutron. Electrons are about 0.054% as massive as neutrons, according to Jefferson Lab.

Joseph John (J.J.) Thomson, a British physicist, discovered the electron in 1897, according to the Science History Institute. Originally known as “corpuscles,” electrons have a negative charge and are electrically attracted to the positively charged protons. Electrons surround the atomic nucleus in pathways called orbitals, an idea that was put forth by Erwin Schrödinger, an Austrian physicist, in the 1920s. Today, this model is known as the quantum model or the electron cloud model. The inner orbitals surrounding the atom are spherical but the outer orbitals are much more complicated.

The neutron’s existence was theorized by Rutherford in 1920 and discovered by Chadwick in 1932, according to the American Physical Society. Neutrons were found during experiments when atoms were shot at a thin sheet of beryllium. Subatomic particles with no charge were released – the neutron.

Neutrons are uncharged particles found within all atomic nuclei (except for hydrogen). A neutron’s mass is slightly larger than that of a proton. Like protons, neutrons are also made of quarks — one “up” quark (with a positive 2/3 charge) and two “down” quarks (each with a negative one-third charge). 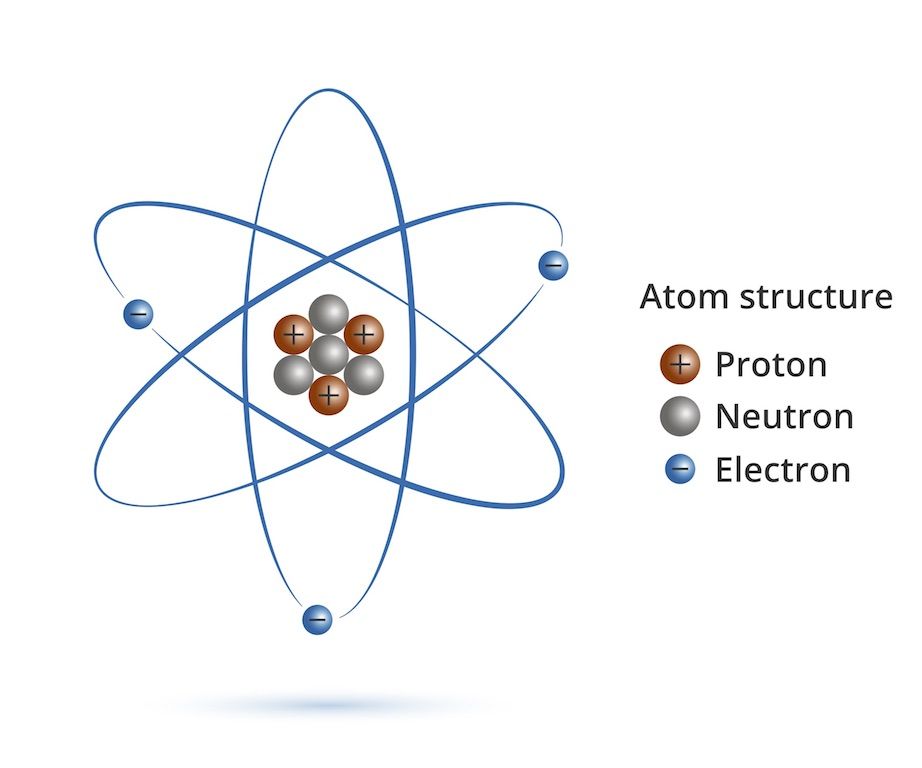 History of the atom ?

The theory of the atom dates at least as far back as 440 B.C. to Democritus, a Greek scientist and philosopher. Democritus most likely built his theory of atoms upon the work of past philosophers, according to Andrew G. Van Melsen, author of “From Atomos to Atom: The History of the Concept Atom” (Duquesne University Press, 1952).

Democritus’ explanation of the atom begins with a stone. A stone cut in half gives two halves of the same stone. If the stone were to be continuously cut, at some point there would exist a piece of the stone small enough that it could no longer be cut. The term “atom” comes from the Greek word for indivisible, which Democritus concluded must be the point at which a being (any form of matter) cannot be divided any more.

His explanation included the ideas that atoms exist separately from each other, that there are an infinite amount of atoms, that atoms are able to move, that they can combine together to create matter but do not merge to become a new atom, and that they cannot be divided, according to Universe Today. However, because most philosophers at the time — especially the very influential Aristotle — believed that all matter was created from earth, air, fire and water, Democritus’ atomic theory was put aside.

John Dalton, a British chemist, built upon Democritus’ ideas in 1803 when he put forth his own atomic theory, according to the chemistry department at Purdue University. Dalton’s theory included several ideas from Democritus, such as atoms are indivisible and indestructible and that different atoms form together to create all matter. Dalton’s additions to the theory included the following ideas: That all atoms of a certain element were identical, that atoms of one element will have different weights and properties than atoms of another element, that atoms cannot be created or destroyed and that matter is formed by atoms combining in simple whole numbers.

Thomson, the British physicist who discovered the electron in 1897, proved that atoms can be divided, according to the Chemical Heritage Foundation. He was able to determine the existence of electrons by studying the properties of electric discharge in cathode-ray tubes. According to Thomson’s 1897 paper, the rays were deflected within the tube, which proved that there was something that was negatively charged within the vacuum tube. In 1899, Thomson published a description of his version of the atom, commonly known as the “plum pudding model.” An excerpt of this paper is found on the Chem Team site. Thomson’s model of the atom included a large number of electrons suspended in something that produced a positive charge giving the atom an overall neutral charge. His model resembled plum pudding, a popular British dessert that had raisins suspended in a round cake-like ball.

The next scientist to further modify and advance the atomic model was Rutherford, who studied under Thomson, according to the chemistry department at Purdue University. In 1911, Rutherford published his version of the atom, which included a positively charged nucleus orbited by electrons. This model arose when Rutherford and his assistants fired alpha particles at thin sheets of gold. An alpha particle is made up of two protons and two neutrons, all held together by the same strong nuclear force that binds the nucleus, according to the Jefferson Lab.

The scientists noticed that a small percentage of the alpha particles were scattered at very large angles to the original direction of motion while the majority passed right through hardly disturbed. Rutherford was able to approximate the size of the nucleus of the gold atom, finding it to be at least 10,000 times smaller than the size of the entire atom with much of the atom being empty space. Rutherford’s model of the atom is still the basic model that is used today.

Several other scientists furthered the atomic model, including Niels Bohr (built upon Rutherford’s model to include properties of electrons based on the hydrogen spectrum), Erwin Schrödinger (developed the quantum model of the atom), Werner Heisenberg (stated that one cannot know both the position and velocity of an electron simultaneously), and Murray Gell-Mann and George Zweig (independently developed the theory that protons and neutrons were composed of quarks).

Ever wonder how we actually know that atoms exist? Here we’ll learn what atoms are and exactly how scientists went about figuring all this out.